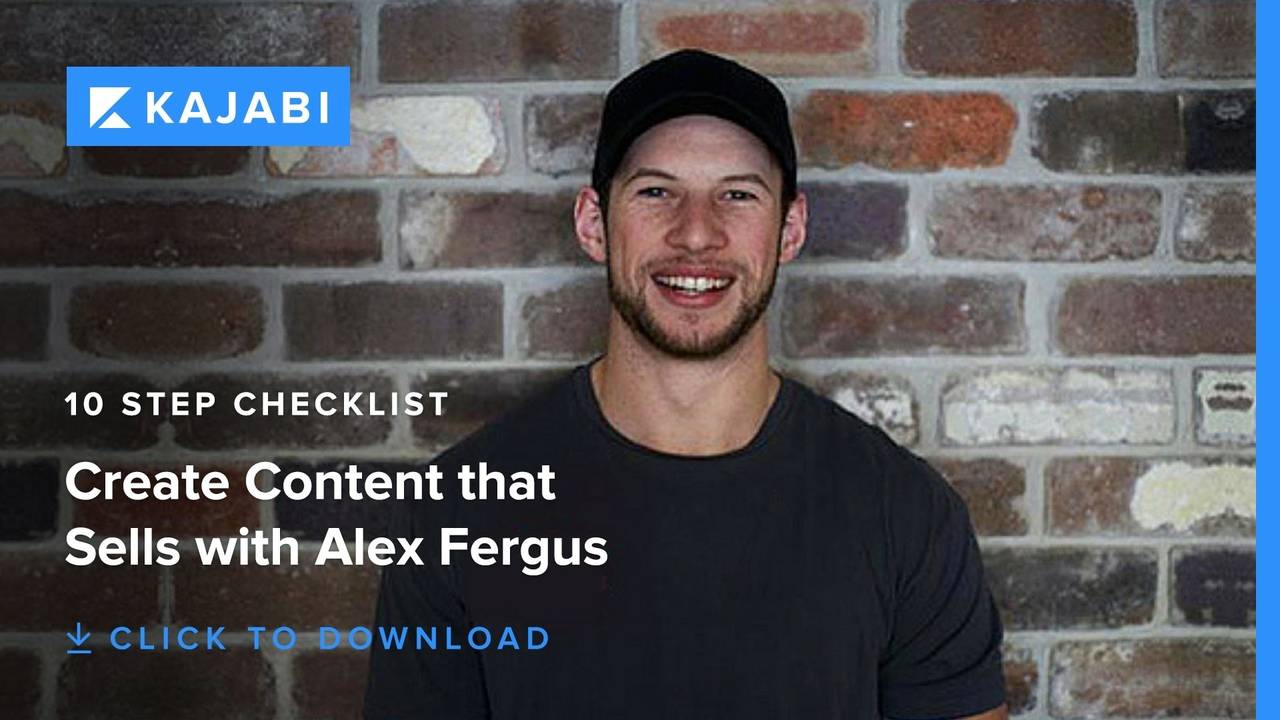 Here at Kajabi, we’re passionate about helping entrepreneurs achieve their dreams. Alex Fergus, a fitness & wellness instructor, is one of our esteemed #KajabiHeroes who recently shared his storym as well as some of the tips and tricks he’s used to become successful.

We’re going to break down some of the lessons, tips, and experiences Fergus shared with us (if you want to watch our interview with Alex, click here). Additionally, we’ve prepared a special downloadable document to help you replicate Fergus’s success.

Fergus runs an online business based on the Kajabi platform. He’s dedicated to helping people look and feel better through fitness and wellness guides, which he’s more than capable of doing thanks to his background in sports and personal training.

However, unlike many fitness entrepreneurs, Fergus doesn’t just focus on the number of reps his customers do at the gym or the number of laps they swim in the pool. His online courses, e-books, and other digital products also help people maximize other areas of their lives to feel better, including:

He takes a holistic approach with his online courses so his customers can revolutionize as many aspects of their lives as possible. In fact, many of his digital products focus entirely on sleep. He believes that recuperative, restorative rest can have a massive impact on one’s health.

Before we dive into Fergus’s undeniable business success, however, let’s take a moment to get to know the man behind the online business.

He used to be a personal trainer, but before that, he found himself working in investment banking. Over several years, he found himself frustrated by the disconnect between his office job and his life’s purpose.

Alex grew up with a healthy competitive instinct, which translates well to business. He loves to compete — against himself and others. That made him ideal for the fast-paced, high-stress environment of investment banking, but it also aligned him with another path.

In those days, he shared a home with several housemates, and he once told one of them, ““If I ever work so late so I can’t train...I’m going to have to quit.” Lo and behold, just a few weeks later, he found himself working late at his desk, and he didn’t leave the office until the gym closed for the evening.

So he quit investment banking.

He wanted to be the best he could be in all aspects of his life, which led him to studying wellness. After he got sick, he did lots of studying and discovered that he’d accrued significant knowledge on those subjects. Plus, he felt that there was more to fitness than simply visiting the gym once per day.

That led him to start a personal training business (one of several). It turns out that Fergus had a latent entrepreneurial spirit. He owned a website design business as well as an e-commerce store before he dove into personal training.

While Fergus enjoyed his career in personal training, he felt driven to figure out how technology could make him more effective and more efficient. Consequently, he started using apps to send his clients workouts and to track their progress.

He experienced a lightbulb moment when he realized that he could serve more people if he created workouts and other wellness-related courses and digital products on a larger scale. He wanted to touch more lives and help more people feel their best, which led him to Kajabi.

Fergus needed a hook, though — something that made him different from every other fitness entrepreneur on the planet. He found that hook in his own belief system.

According to Fergus, it’s not all about reps on the weight machine. Wellness takes into account many variables. “It’s all about the environment,” he says, from one’s gut health to the ideal bedroom atmosphere for sleeping. He also takes into consideration food and nutrition as well as healthy thoughts.

After all, if you’re thinking unhealthy or negative thoughts, you might struggle to find holistic wellness.

Fergus was very interested in computers from a young age. He majored in project management and information systems in school, and he wanted a scalable way to grow his business. Ultimately, he wants to build his empire far beyond online courses and digital products, but those information products became a gateway into the life he desired for himself.

He began blogging, creating mini courses, writing e-books, and emailing his audience. He eventually developed his own website and, as of today, has several Kajabi courses available. As for why he chose online courses and Kajabi, Fergus found he enjoyed recording videos because he could scale much faster.

On Becoming a #Kajabi Hero

“It was tough,” Fergus says when asked about his start in Knowledge Commerce. He sacrificed gym clients, worked long hours, and endured criticism from others who didn’t believe he could build a viable business. He says it was slow going, especially at first, but he relished the small moments, from the first 10 subscribers on his email list to the first purchase of his first online course.

On Breaking the #KajabiHero Barrier

This constituted a major breakthrough for Alex Fergus. He felt as though he had achieved something incredible by joining the ranks of our highest-performing customers.

Still, Fergus advises that there’s lots of sweat equity involved in any entrepreneurial journey. He’s dedicated to building his business as far as possible, and he disabuses the idea of “overnight success.”

Sure, some people might seem to achieve overnight success, but the public doesn’t see the years of back-breaking effort behind that sudden rise to glory. Fergus advises other Knowledge Commerce professionals to expect a long journey toward success and to find motivation in the small achievements.

On Finding the Motivation to Persevere

As a coach, Fergus focuses first on the customer’s reason behind potentially buying the course. He wants to know the root cause.

He uses the example of a customer who says, “I want to lose weight so I can look good in a bikini.” However, Fergus prefers to dig deeper. “Why do you want to wear a bikini?” he might ask. The customer might say, “Well, I haven’t had a date in four years, and I’d like to feel more confident in myself.

He uses that same motivation to power him through the tough times. His motivation comes from the desire to start a family, to build a successful business, and  to design his own healthy lifestyle. Online entrepreneurship became the freedom to do what he needs to get there. He’s passionate about the “Why” behind it all.

Eventually, Fergus would like to start his own organic farm on his homestead. Once he’s achieved that, he’ll invite people to visit and to learn about the way in which he lives his life. Ultimately, that could prove very instructive.

On Building a Knowledge Commerce Business

Alex Fergus has created four websites, so he’s been through lots of trial and error. He wishes he’d known that he should invest in the best possible tools to get the best results.

He admits that, early in his career, he tried to get away with the free versions of products, such as plugins for his website. In his opinion, those choices set him back. His advice is to get the best of everything so you can make a big impact and get as much data as possible.

Incidentally, that’s why we pack so many features into the Kajabi platform.

“I’m only going to add value to the Internet,” he says, which sounds like a healthy attitude for any entrepreneur. Fergus sometimes spends six weeks on an article, such as the one that was 12,000 words long.

“Once it’s there, it’s out there forever,” he states, referring to his attitude toward the Internet. He advises prioritizing quality over quantity. He used to publish lower-quality content and experienced little engagement, but now that he’s more committed to quality content, he sees higher engagement levels.

Unlike many entrepreneurs, Alex Fergus took a unique route to building his email list and accruing a following. This makes him living proof that you don’t have to follow someone else’s “blueprint” to get results.

For instance, most of his initial subscribers came from his personal training clients and other face-to-face contacts. He’d send out a newsletter with links to articles he found valuable as well as brief tips and tricks.

Creating his blog allowed him to attract more email list. He didn’t use social media at all until about a year ago, after developing traction on his website. A mentor advised him to use social to show off his unusual approaches to fitness and his unique brand as well as his physique.

He started on Facebook and Instagram and admits that it’s beneficial, though he was hesitant, and he’s excited about using it to attract in-person clients as well.

On the Best Advice He Can Give

When asked for his best advice for other Knowledge Commerce entrepreneurs, his response was short, yet nonetheless powerful: “Less But Better.”

The mindset comes from a 1930s designer who felt that curating simple spaces with high-quality things was better than accruing piles of junk. Fergus translates that advice to his business as well as to his approach to wellness.

Alex Fergus’s flagship product was a high-end online course that he made available exclusively by word of mouth. He didn’t advertise it or promote it, and only people with high income levels could afford it.

He calls it “The Program,” and it’s designed to help executives and business owners improve their wellness while still running their businesses or doing their jobs. However, Fergus was anxious to create a comparable course that anyone could afford.

He’s spent the last 18 months reworking the executive program into a course that will have greater reach and will prove more accessible to people of all income levels.

What can we learn from Alex Ferguson? He’s an accomplished entrepreneur who uses technology and his knowledge to help other people live healthy lives.

How has he done it? With Kajabi. If you’re not a member yet, consider signing up today to create your own online courses and other digital products. You can replicate Fergus’s success based on your own knowledge and passion.

Best of all, the first 14 days of your subscription are on us.

If you're ready to get started with building your Knowledge Commerce business, first grab this checklist we've created using Fergus' own business as a blueprint.

It’s ideal for creating a winning strategy from the start, and it’s packed with useful tips from Fergus himself.

Create Your Own Exit Plan With This Week's #KajabiHero

Should you adjust pricing during uncertain times?

Face Your Fears With This Week's #KajabiHero