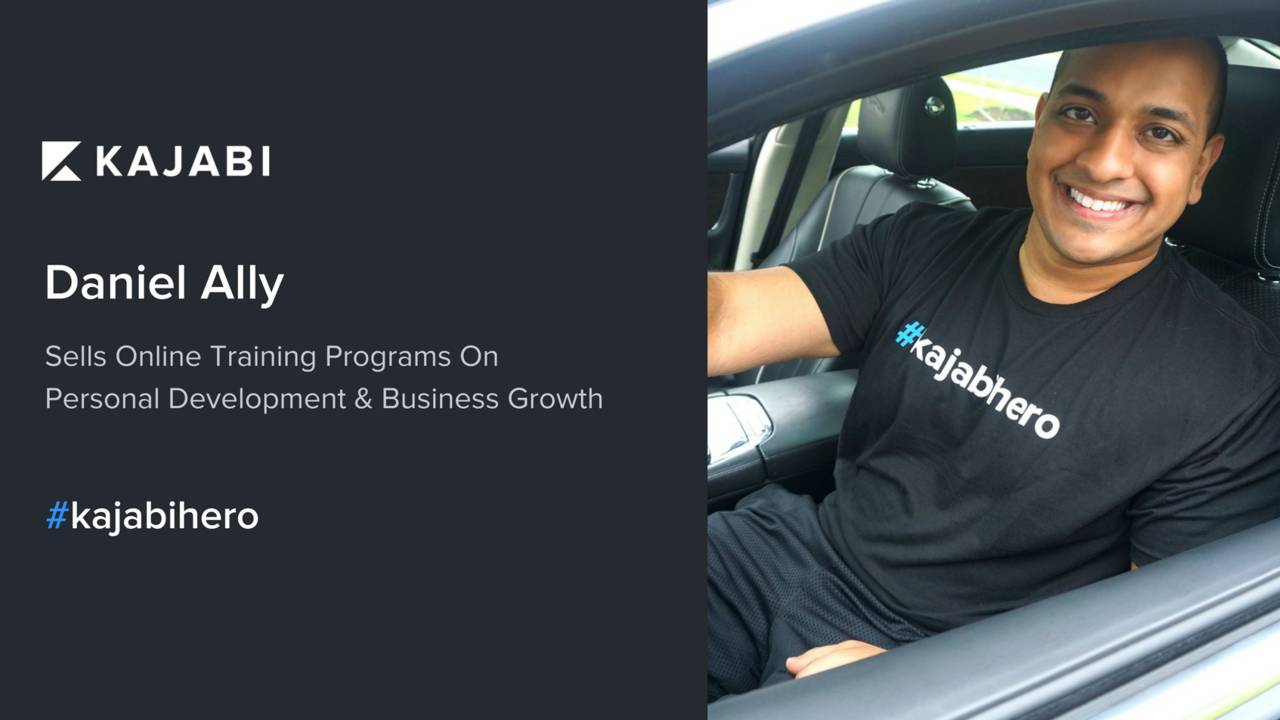 This week’s #kajabihero has an incredible and amazing story. Born homeless and raised in poverty, Daniel has truly overcome seemingly insurmountable odds to be where he is today, and I am so happy to have the privilege of interviewing him.

Daniel uses Kajabi to teach personal development on the highest level. His 12-week course offers life lessons that people don’t learn in school, at work, or at church. Some of these ideas include money and time management, making decisions, deciphering and leveraging credit scores, and managing relationships. His online product is called Daniel Ally’s 12-week Success Program, and to add to this,  he is also the author of three books.

Those who sign up for the course will receive one new topic every week for 12 weeks. Each topic is 6 ½ hours of material and mentorship by Daniel himself.  I asked Daniel how he became so well-versed in all of these topics, and he took the camera and showed me his vast library of books and referenced them as ‘his mentors’.

His strategy is a simple one, but it does take work. Daniel shares that you can learn anything you want from those who have gone before you and achieved what you want to achieve. By reading books about subject matter that interests and benefits him, he is then able to share what he knows with other people.

Growing up extremely poor in the Bronx in New York, Daniel realized that in order to change his reality he needed to change his mentality. This is one of the primary messages that he shares with others.  He explains that people don’t realize that they need to change the way they think about themselves, the world around them, the people who surround them, and what they do with their lives. A common pitfall that people can get stuck in is the tendency to blame their circumstances or exterior forces for the situations that they find themselves in.

Reach for the Stars

Daniel wrote his first book, You Are the Boss, when he dropped out of his MBA program and he wrote it in only ten days. The book encourages people to realize that they are the path pavers of their own life and that their life is the sum total of the choices that they make.

He says that most people are too busy conforming when they should be busy performing. He challenges people to quit trying to be someone else and instead to be who they are called to be. Your biggest asset is who you are, weaknesses and mistakes included.

In the year that he wrote his book, he set a goal for himself to give 200 speeches since he wanted to be a public speaker. His naysayers said that he needed more experience, so instead of listening to their doubts, he set about to get as much experience as possible. After being on drugs for 10 years and holding 40 different jobs by the time he was 21, Daniel knew he had enough ‘experience’ and he just decided to pursue his goals. He booked as many speeches as he could and at each one he would sell his book. He also sold his book door to door and on the street.

Wherever there are people, there are opportunities, and Daniel saw each and every person as an opportunity.

Daniels’ second book is called The Winner’s Lifestyle, and it’s 66 tips that he uses and has used to become successful. He encourages people to develop healthy habits that will enable them to reach the goals they set for themselves. Some of these include journaling, taking notes on your day, asking positive questions, meditation, and always knowing your bank balance.

His third book just released this year and is titled The Abundance Mentality and it’s a compilation of all of his articles. Daniel has been featured in Time Magazine, Fortune, Huffington Post, and others.

Daniel’s life changed at age 21 when he heard a speaker on an audio program say, ‘You become what you think about.’ At one of his many speeches, someone suggested that he create an audio program so that people could buy it and listen from all over the world. He wrote and produced the entire series himself, put 5 hours of content on 6 CDs, and called it The Ultimate Advantage. He was pleased with the results, but knew that it could be even better on video.

He had just started a YouTube channel at the time, so he was learning the ins and outs of filming and video. It wasn’t a far reach for him to decide to use Kajabi, create his 12-week course, and to start paving the way to becoming his own hero.

Daniel also did a TED Talk, How to Become a Millionaire, and it has reached over 5 million views. He also receives hundreds of emails and actually enjoys speaking on the phone with people, and he makes sure that people are getting the course that he offers on Kajabi. He teaches people that before they set off on their grand business plan, they need to learn the fundamentals. Some of these topics include setting goals properly, finding out who you are and what you want to do, and ultimately how to reach those goals.

Once someone comes to the realization that they don’t actually have these answers, they trust Daniel and they buy his product. This product serves them very well. Daniel often sees the clients who complete his 12 week course return to him seeking mentorship and they are excited to take it to the next level.

I asked Daniel to share with us his biggest mistake or regret on his journey so far. He said he should’ve created more products and written more books. While still only in his 20’s, Daniel knows there is a lot of time left, but he also sees the reality of how quickly time passes. A great piece of advice that he shared with me is making sure to value the time you have right now. There are always opportunities in life to learn and to create, so make sure you’re not watching those pass on by.

Daniel has a passion to do more and create more. His choices thus far have brought him happiness and he wants to help others get to that place as well.

Achieving success only comes by hard work and passion. In order to book 200 speeches, Daniel had to hustle by emailing and calling to book gigs. For every 50 emails he would send out he would book maybe 1 or 2 speeches.

Daniel shared two major pitfalls that he has noticed in his career. The first is that people are trying to do everything themselves and fly solo. The second is that they are perfectionists and don’t want to move forward until they have the ‘perfect’ speech, the ‘perfect’ product, or the ‘perfect’ audience.

Daniel shared that there is no perfect audience and said he used to drive three hours to speak for free to 2 or 3 people. He has observed that most public speakers are trying to give 20 different speeches to one audience instead of giving one speech to 20 different audiences.

He’s currently working on his third TedTalk and it’s not as easy as getting up on a stage and talking. He practices his speeches thousands of times and works incredibly hard to become proficient enough to not only impress others but himself as well.

He encourages people with The Rule of 100. If you do anything 100 times, whether it’s giving a speech or selling a product, you will become proficient in it and find success. Sometimes people get hung up on their failure after one try or even several tries, but it can take months to see results after putting the work in.

Finding that thing inside of you that you are passionate about and that you can share with the world is the key to finding your fulfillment. Don’t be a slave to your cubicle, keyboard, or whatever it is that doesn’t light your fire.

Daniel credits his success and calling to God. He describes it as something greater than himself. He shares that you can do the impossible when you have God in your life.

That’s how Kajabi started. It was just two guys with big ideas who were willing to work hard and we were fueled by the fact that we would be helping people all over the world share their passions. We couldn’t fail. It is powerful to share your message with others, and then it inspires them to share theirs as well.

I asked Daniel what he would tell someone who is just starting out. His encouragement was to make sure you have enough valuable content. Don’t ramble or give out scattered information that doesn’t give people value. If clients or customers feel like what you have to say or teach isn’t worth their time or money, you will lose them and never get them back.

To those who doubt their ability to sell or think they are not gifted in it, Daniel says developing your story in very important. Whether it’s your personal story or your business story, customers want to know about it and about you. When you build trust you gain clients. There are a lot of programs online, and people need to be convinced that you are the person who is going to take them where they want to go.

He also shared that people need to know who they are and what they want to teach, and then teach it at the highest level. Be confident in what you are teaching, and if you’re not, then go back and work on it some more. If people can see themselves succeeding with what you have to offer then they will buy from you.

People work really hard for their money, so if you are going to charge $500 or $1000 for a course, it needs to deliver the results you promise.

Looking ahead, Daniel and his team are working on something called The School of Wealth, which will also be offered on Kajabi. He knows there are thousands of potential clients that want mentorship and are willing to pay for it, and so he is working hard to deliver that subscription based course. This will give the client access to his training and lots of extras that aren’t offered online or anywhere else.

You can find out more about Daniel and what he offers at danielally.com.

You are capable of more than you know. You have knowledge and experience to share with the world and Kajabi is simply the tool that helps you to do that.

Mix Up Your Mindset - Riches In Unlikely Niches #KajabiHeroes

Leverage your expertise into an online platform

Take A Leap Of Faith With This Week’s #kajabihero