Start free trial
Blog
/
Create Your Product
/
How To Stop Trying To Be Perfect and Get Your Business Running with The Fightmasters! [Video]
... 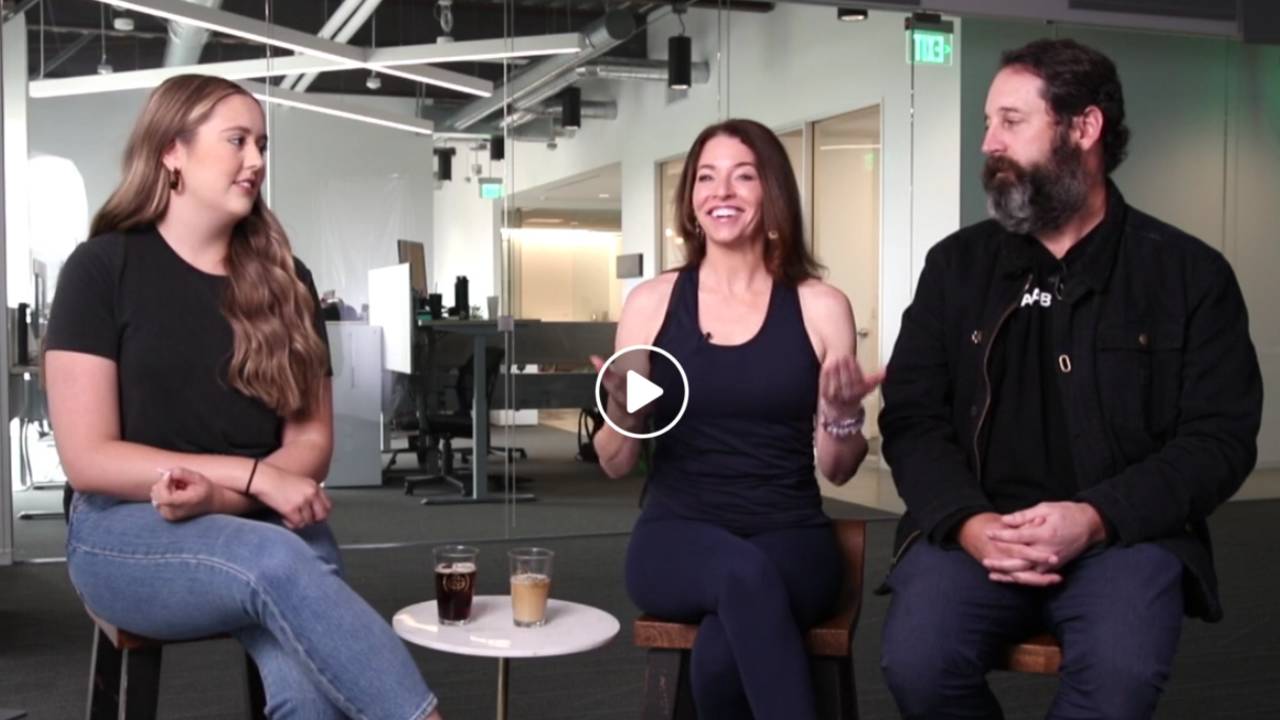 Recently we had a couple of our AWESOME Kajabi Heroes, Duke and Lesley Fightmaster of My Yoga Pal join us at the Kajabi office for an informative and enlightening Facebook Live video.

Duke and Lesley offer life-changing transformation through yoga and use Kajabi to run their business.

Lesley says, “Yoga is not about the pose—yoga is really about being in the moment, quieting the mind and connecting with your best self.”

You can watch the entire video above, including a yoga demonstration that you can follow at home specifically for people who work at a desk all day!

Duke and Lesley are not traditional business people.

Before starting their Kajabi business, Duke and Lesley had a yoga YouTube channel which they would upload videos to and then ask for donations.

They had sort of fallen into the "YouTube thing" because Duke was working a horrible, depressing office job.

Out of his misery, he got an idea.

"I should be the new host of the Tonight Show," he thought.

This was when Jay Leno was being replaced by Conan O’ Brien and Duke naturally thought that he should be the one to replace Conan.

So he started A YouTube talk show out of their bedroom.

And it wasn’t making any money.

But Duke kept doing it for a year and a half through bankruptcy and foreclosure.

Finally, Duke decided to record Lesley doing a yoga routine which ended up getting thousands of views!

After this, Duke and Lesley decided to upload yoga videos and ask for donations.

Duke and Lesley hated the donation model because it made them feel needy, but they didn’t know what their other options were.

Until they found Kajabi.

One of the Fightmaster's friends, Chris, recommended they check out Kajabi when they decided to move away from a donation-based model.

Because Lesley and Duke were not “business people” they didn’t overthink creating their first product.

Duke was really into the P90X workout at the time so they decided to create a “P90x for yoga”  class and called it 'Thrive.'

Duke says, “The biggest struggle is getting over your perfectionism in the beginning. Get it out there and the people will tell you what to change and what they want.”

After the success of Thrive, the Fightmasters decided to expand their product line.

Their flagship product is the My Yoga Pal membership site.

Included with My Yoga pal is a beginner program which is perfect for people who have never done yoga before.

My Yoga Pal also includes the Thrive program which is perfect for beginner to intermediate students.

There is even an advanced class called 'Shine.' Each Shine course is 60 minutes long and leads to a peak pose.

One of the newest offerings the Fightmasters have created is called Gratitude Corner.

Gratitude Corner is a community where people can come to share and see others gratitude journals.

“Gratitude Corner is a place on our website where we encourage people to go every night before they go to sleep and write down three things they are grateful for that happened that day. It’s kind of a neat way to practice gratitude which can improve your mood and help you in general. It’s also really neat to see other people’s gratitude and what they are going through. It literally makes me feel better and is a good way to connect with other people practicing gratitude.“

There’s even a space on the Fighmaster’s site where their students can give them ideas for what they would like to see.

The Fightmasters also offer a My Yoga Pal Perk of the Month.

When asked about the most effective technique they used to build their business, Duke revealed that they started to email their list every day.

Duke says, “In the beginning we had people unsubscribe from our list but now that we’ve been emailing every day, we’ve really built this connection with our audience. We use Kajabi’s email list and now when Lesley forgets to email we get all these emails asking if she’s ok!”

Every day Lesley sends an email with a lesson or a meditation to their entire list.

These emails are 100% content with a single call to action at the bottom that says something like, "If you're interested in learning more about yoga or deepening your practice, learn more about My Yoga Pal."

This simple strategy helps the Fightmasters bond with their audience and make sales without being too sales-y or pushy!

We recently put together a FREE proven, step by step program to take you from day 1 to actually making sales!

We called it the 28-Day Challenge.

In the 28-day challenge, you’ll learn everything you need to know to earn your first $1,000 and become a Kajabi hero in just 28 days!

With the 28-Day Challenge every day you’ll get video lessons, detailed downloads and more that help you do everything from brainstorming your ideas to creating landing pages and making sales!

Sign up NOW to get started to start the 28-Day Challenge and become a Kajabi Hero!

How to 2x your next product launch

The Top 10 Most Profitable Under The Radar Niches For e-Courses!

25 Tips on How to Create a Beautiful and Effective Presentation