After Landing on “Shark Tank” for a Second Time, Kajabi Hero Reveals How to Uncover Your Superpower 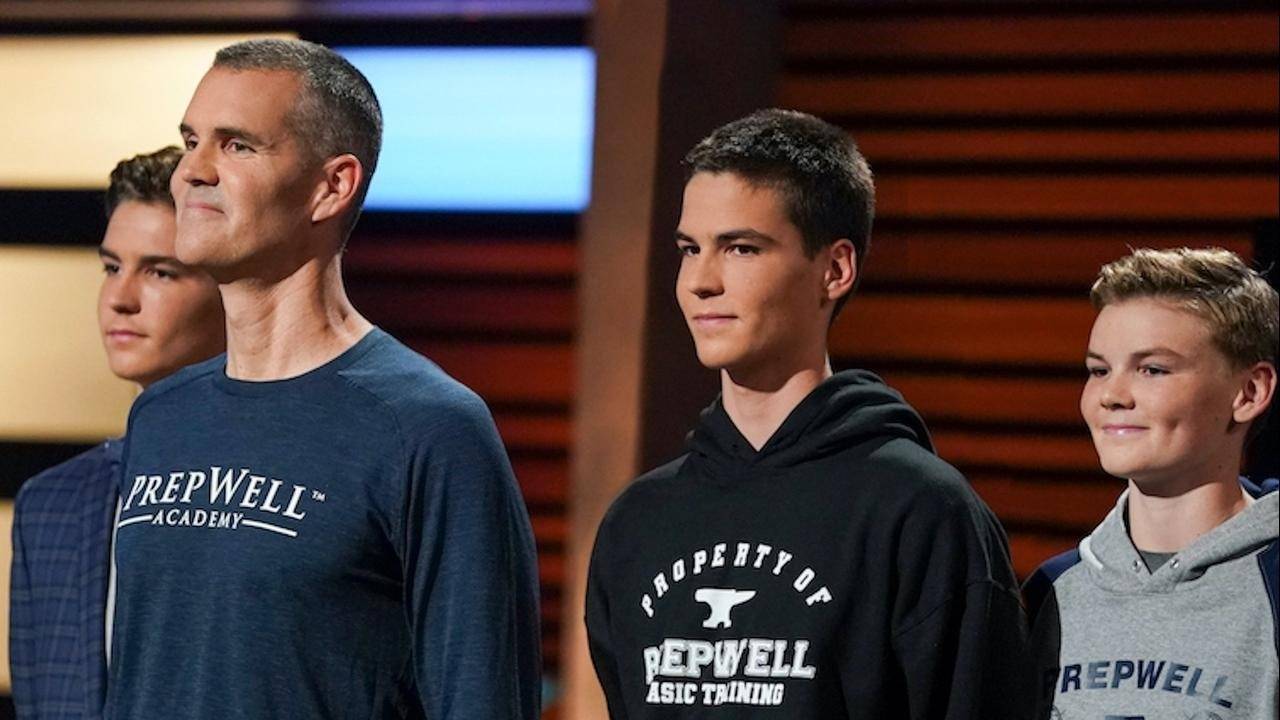 If you had less than a 0.1% chance of achieving something potentially life-changing, would you go for it . . . more than once?

Those were the odds Phil Black had to appear on “Shark Tank,” the Emmy Award-winning reality show that features entrepreneurs pitching investors. As part of the grueling application process, he waited in line among hundreds of hopefuls for five hours, after a three-hour drive—just to give a 60-second elevator pitch.

The odds didn’t phase Phil, and neither did the process. Getting into the most competitive and sought-after programs is his superpower. He’s a former Navy SEAL officer, Goldman Sachs investment banker, and Harvard MBA. Even though his first “Shark Tank” pitch in 2014 didn’t lead to a deal, he tried again. This time, he pitched his new business: PrepWell Academy, a college admissions preparation program.

We won’t spoil the episode for you, but we will share Phil’s latest insights as a serial entrepreneur and long-time Kajabi Hero. Ten months have passed since Phil pitched the panel of celebrity business titans. Several days have passed since the show aired April 3, a few weeks deep into the new world of social distancing. In this post, Phil takes us along for a wild ride. He opens up about his business challenges, the most impactful feedback from the “sharks,” and discoveries about his own advice.

Creating your own category is an uphill climb

Standing out in the market is incredibly valuable for any business. But when a product or service feels unfamiliar to the market, the business must overcome greater challenges.

Phil is no stranger to creating a business based on a new concept. Back in 2004, Phil launched FitDeck, a custom deck of playing cards for exercise and sports training. Shuffle the cards and boom, there’s your workout. FitDeck, which he later sold to a fitness manufacturer, was the first fitness product that delivered workouts in a deck of cards.

“That's always a very hard thing to do: to create a category that no one's ever done before,” he said, recalling the years he spent growing that business. Eventually, Phil expanded FitDeck to 40 different workout varieties and managed to sell in bulk to schools and fitness centers. All in all, that business earned more than $5 million in revenue.

Both of his businesses, he realized, had created a new category. PrepWell Academy is a multiyear membership coaching program geared for ninth and tenth-grade students, priced at $15 a month. The disconnect, he explained, is that students and their parents typically start thinking about college prep in the eleventh and twelfth grades.

Now Phil finds himself in the same situation that he once did with FitDeck: introducing his market to something unfamiliar. Educating parents and teens about the value of preparing early for college admissions is proving to be a major challenge.

“Kids aren't mature enough at that age,” he said. “They don't get it. The pressure's not on. The stakes are not high enough. The parents aren't armed enough to know.”

Another big difference between his current and previous business is the product itself. FitDeck could be an easy impulse buy, and as a commodity, the product could sell in bulk. PrepWell Academy, on the other hand, is a program where content gets distributed over many months—inherently not geared to impulse buys or bulk selling.

Lori Greiner, the investor known as the “Queen of QVC,” suggested repackaging his service to something more familiar like a crash course with a one-time fee. Although Phil considered her feedback to be fair, he still believed that intentionally spreading out content over time would serve his customers better.

Whether or not Phil landed a deal on “Shark Tank” (we will never tell), his experience pitching to the celebrity panel has given him plenty of food for thought:

The membership model is competing with many other subscriptions. On one hand, membership pricing seems to reduce risk when compared to one-time package pricing. Yet, you also have to consider what model will be the easiest, most direct line to your customers. What pricing model works best for your market?

For Phil, a new customer is more than a $15 win. Because his membership is designed for a multiyear lifecycle, he considers a new customer a $400-$500 win, taking into account the recurring revenue over the long run.

“Sometimes, it's disheartening to work really hard, only to get a few people to sign up a day or a week,” he said. That’s why it’s important to have some money upfront to get customers in the pipeline, he added.

Happy customers who publicly rave about your product on social media can serve as a powerful lever for any business. He remembers FitDeck getting that kind of social media attention after appearing on “Shark Tank” the first time, which spurred customers to buy it for their friends or for holiday party stocking stuffers.

With PrepWell Academy, he’s discovered that the nature of his business is difficult to cultivate that same social engagement. Although Phil gets plenty of customers who thank him in writing about how much his program has helped their kids get into college, it seems that parents tend to give their kids the credit. They’re more likely to say publicly, “Hey, I have a smart kid” rather than, “Oh it must be that PrepWell program,” he explained. Students may also feel competitive with their peers vying for the same spots at top tier universities. Those customers are less inclined to give public shout-outs to the program.

New products can extend the lifetime value of each customer

As PrepWell Academy continues to grow, Phil is considering expanding his programs to continue serving his customers beyond college admissions. He’s exploring ideas like how to survive your first year in college, how to get your first internship, along with various career coaching programs.

“The beauty of my product is that we have a relatively low cost of acquisition compared to what the long-term value of the customer is,” he explained.

As Phil discovered expanding the FitDeck product line, adding new products can dramatically boost revenue. Internal research at Kajabi supports that theory. See Figure 1 below, showing the correlation between the number of products and our Kajabi Heroes’ revenue levels starting at $100k up to $1 million.

Rediscovering the power of his own advice

Major life events sometimes push you to tap into what you’ve always known. For Phil, the developments surrounding “Shark Tank” and the global pandemic both seemed to validate the principles he teaches. The following principles can also serve as actionable advice to entrepreneurs feeling the angst in these uncertain times:

Preparation is such a high priority for Phil that his business model depends on it. He’d rather work with fewer high school freshmen and sophomores whom he can help more effectively, than take on a flood of new business from juniors and seniors. For him, it’s not about the money. It’s about sticking to his conviction.

That conviction proved extremely valuable for his “PrepWellers,” as he calls his current customers. He always advises students to take the college entrance exams (SAT and ACT) early because their score helps them gauge what tier university to consider. Typically, students have the option to take the test in the fall and spring. This year, as schools around the U.S. began to close in mid-March, spring ACT and SAT tests were called off.

“All of those people who delayed and procrastinated or didn't know that they could take it earlier or weren't prepared early enough—they have no idea what type of college they should even be thinking about,” he said.

After filming the latest “Shark Tank” episode 10 months ago, Phil set a goal to have a podcast up and running no matter what. He knew that by the time the episode aired, he needed to have a body of work that viewers could immediately discover. Those podcast listeners could eventually become customers. He launched his podcast six months ago and now has 27 episodes done. His next goal? A book set to finish in about six to nine months.

As a fitness enthusiast, he also recommends people set fitness goals—especially these days with gyms shut down and routines disrupted. If you sign up for a 10k marathon or a Spartan race several months ahead, for example, it helps motivate you with a specific training plan. Setting goals helps you leapfrog, he said, “as opposed to having some indefinite nothingness.”

Several years ago when Phil sold FitDeck, he took a few weeks off to reassess his life. He went through the same exercise he now teaches his high school students working on their college essay. For entrepreneurs struggling in their businesses right now, suddenly facing seemingly endless hours at home, Phil recommends the following:

“I'm not necessarily like the brightest guy in the room, the best athlete in the room, the biggest business brain in the room. I'm okay in all of those things,” Phil said. “So how did I rise to the level of being in that 1% in five or six different areas? It's this idea of early preparation, doing things ahead of time, having that vision. It's a combination of vision and discipline. You put those together and somehow that seems to be the thing that I'm good at.”

Lessons in entrepreneurship from a beauty industry mogul, business mentors, and marketing experts

After Landing on “Shark Tank” for a Second Time, Kajabi Hero Reveals How to Uncover Your Superpower

Get Unstuck With This Week's #KajabiHero